COUP DE GRACE/ARCH METAPHOR/MASSMAN.  Show starts off with a no-show by MASSMAN (canceled).   Audience for this show iz between 25-30 people.  COUP DE GRACE opens the show with tapes…. “No Warning Shots…. SHOOT TO KILL”…. “No Warning Shots….SHOOT TO KILL” then its an attack ov high frequency pitches and low rhythmed rumbling.  Screaming an metal percussion shortly follow– its an all & all-out statistic war on the audience.  A large CG banner iz burned an lead vocalist iz left in the fumes screaming and smashing metal on metal.  Violently intense.

from the diaries of John Zewizz

COUP DE GRACE’s second performance, its all az effective az the first.  Smashing a iron pipe while screaming, and rambling and distorting tapes roll on.  The anger and violence ov a wounded pit bull.  The place iz left a mess.  This show left more trash and debris than a hit bomb shelter.

from the diaries of John Zewizz 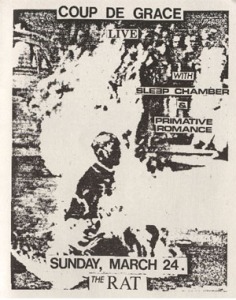 There was about a week free time after the first show in Belgium and then last 3 performances occured in a span of 2 days.  If you look at the dates you will notice that the two Holland confrontations took place the same evening.  This was due to the fact that after the dates had been arranged, V2 decided to change the days of their Metabletica festival.  So we did the show in Rotterdam at 10:00pm, and then afterwards packed everything up and drove to V2 in s’Hertogenbosch, where the last performance was done (starting at about 1:20 in the morning).  The components of the confrontations were as follows;
Audio: Backing tapes, Vocals, Synthesizers & Electronics.
Visual: Slides and Motion Pictures. (In the Rotterdam show only slides were used as the movie projector malfunctioned; at the V2 show slides and movies were shown, the movies only lasting about 5 minutes as the film projector there was put out of commission).
Surprisingly enough after a whole day of driving (from Germany to Rotterdam, then playing the show there, then driving to V2) the last confrontation was probably the most powerful of all… 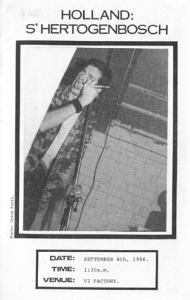 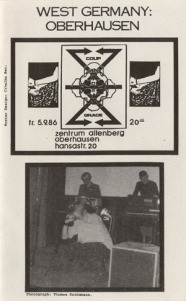 Unknown if Coup De Grace actually performed at this event.

The C.D.G, confrontation took place on the final evening of the festival.  C.D.G. was Number 9 in a sequence of Club Moral films, AMVK paintings, an performances by D. Paesman & M. Vanrunxt.  Coup De Grace in this incarnation consisted of a single male with shaved head, kneeling on a grey stage.  C.D.G. Film NO HOPE rojected onto a large screen behind the figure.  The figure removes his shirts and picks up the only object on the stage, 10 Gillette Blue Extra razor blades.  These are then used forcefully, as the ocumentary film ov veinal bloodletting pulses on in the background.  The film ends an figure stands up, bleeding havily under the glare of the white projector lamp.  the whole performance lasted approx. 4 minutes.  The performer, sufficiently disconected, was unable to gauge the reactions (though the organizers later told us that one member of the audience fainted while viewing the action, and that others declared the performer to  be “out of his mind”).