Moynihan started his first musical project in 1984, a power electronics project named Coup de Grace, for which he produced cassettes, image booklets, essays and performed live. In 1988, at the age of 18, Moynihan published an edition of Friedrich Nietzsche’s The Antichrist featuring artwork by Trevor Brown.

“In 1983, when I was fourteen years old, I started doing experiments with electronic equipment. I was fascinated with the idea of electronic instruments, and I had a small kit with which you could build oscillators and circuits that basically made white noise or frequency noise. So I started building those, and little keyboards, and manipulating reel-to-reel tape recorders at different speeds to make noise collage with tapes – that was the first music I did.”

“I was sitting down in my room in the basement of my parent’s house building these things. Around that time I also picked up on the fact that there was other music out there like this, that people actually listened to.”

“I’d hear about one thing and then see a reference to some other music group that would be even more extreme. Not so mush avant-garde or experimental, because I really

don’t like those terms much, but music which carried certain ideas in it. Around that time I discovered Throbbing Gristle, and I tracked down all of their records. SPK as well, and these were the original industrial bands as far as I was concerned.That was before the disco/dance elements came into it.No one else I knew had any interest in this music. It was all things I found on my own. They would usually get one copy of a Throbbing Gristle LP at a local store, set it aside for me, and I’d go down and get the record. Then I discovered, while listening to the radio, a record shop in Boston, which I had never known about, that supposedly specialized in this type of music. I went over there and began getting lots of things. The owner of the store turned out to be the guy who did Sleep Chamber, and I became friends with him. Around that time I was already doing my own music under the name Coup de Grace, starting to record cassettes, and he was encouraging me to put the material out myself. At the time he was releasing tons of cassettes on his record label. By then I’d gotten a synthesizer and had some keyboards. I used to run a Casio keyboard through all these homemade effects to distort it. The original recordings I did were more musical, but they were all electronic. There was also a lot of noisy stuff, and it was pretty harsh overall in terms of content. I put out a couple of cassettes that were extremely limited, but surprisingly they got over to places like Europe, although I don’t even remember at this point how anyone found out about them. They ended up in the hands of some people called Club Moral in Belgium, who did a magazine, called Force Mental, which covered art and music. Most of the music they liked was really extreme electronic stuff along the lines of Whitehouse, and they printed a small, glowing review of the first cassette I put out. They sent a copy of a magazine, and I began corresponding with them, and at a certain point they invited me to come over there to play a festival that they’d gotten art grants for from the Belgian government. I agreed, so they set up what turned out to be this small European tour in the Netherlands and Germany, with the money from the extra concerts paying for all my expenses. It was five or six shows at different places, some of which were just factory warehouse halls: one was in an old movie theater, one was in a nightclub in Rotterdam – different underground venues. They were very, very small shows, but they went over well. That was where I first met Willi Stasch and Rose Kasseckert of Cthulhu Records, who subsequently became more important. After returning to the States I was asked to become a member of Sleep Chamber, which I did for awhile as a side project, though I was still much more interested in continuing my own activities.”

“At the time Sleep Chamber was a lot different from what it is now(1990’s). It really had a disturbing quality to it. It was much more confrontational, and was generally hated by all of the rock crowd in Boston. Later it got more and more accessible, and he obsessed on the sex aspect, which was there when we did the stuff, but it hadn’t become the S/M fashion show it is now. At the same time I kept doing my stuff, and he was still running his record store. When the store went out of business, he had different electronic groups play there in the final few weeks he was open, so there were a couple of live shows I did there as Coup de Grace. Around that time Thomas Thorn, who does the Electric Hellfire Club, also joined Sleep Chamber. He was an old friend of mine, and came out to Boston and joined the band. For a brief period we were both in the band together, and then there was a big falling out, mainly between him and John. I followed suit and quit the band as well; Thomas and I wanted nothing further to do with it. That was the end of that. I was much more interested in going over and spending time in Belgium, as the Club Moral people invited me to come live there in the same warehouse where they lived. I built a whole apartment in the upper floor of this empty factory, and it was totally illegal to live there, so I had to lay low. I couldn’t work there and i tried to stay out of trouble. The rent was a whopping fifteen dollars a month, which made it worth the risk.” 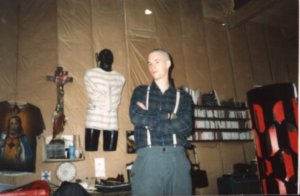 “There was no water, no power, nothing. I taught myself all of that. I lived there for a couple of years, off and on. Then, at that time, another musical event occurred. Thomas was doing his own band, Slave State, that he formed when he returned to Wisconsin after he left Sleep Chamber. It was a techno Skinhead band, for lack of a better description. He and I were still in close contact, and he came over to Belgium to visit. He stayed with me for a few weeks, and we decided that we should try to do a Slave State show over there. We did it in the basement of the factory where I lived – there was a secret room that the guy from Club Moral had discovered underneath where their garage was. It was where they parked. He was cutting a hole in the cement floor so that he could work on his car. The saw went right through the floor and he discovered a whole room under there, full of dirt and debris, mostly ancient Chianti wine bottles, thousands of them. We cleaned out this whole space and had the concert in the cellar, which turned out to be a strange event attended by about fifty people. It was extremely dangerous, totally illegal, and a death trap, to boot, with that many people in a place that had only a tiny metal ladder to get out of the hole.”

“It was really claustrophobic! The concert itself was extremely noisy and fascistic. Quite a few suspicious types showed up, because the propaganda for the show looked incredibly fascist. We were both skinheads at the time. The most amazing part was that nothing bad happened as a result. Club Moral were terrified that the police were going to come and arrest us all for having some strange rally in a dangerous and completely illegal bunker. This hole in the ground. Yes. We drank lots of absinthe before we played. One guy who came from Sweden had the symbol of the band, a lightning bolt inside a triangle, carved into his arm with a carpet knife after the concert because he was so excited by the performance. There were quite a number of interesting repercussions; not long after that, in 1989, I decided that it was impossible to continue living in Belgium because of the illegality of it, and for other personal reasons.”

“Besides the Slave State thing, I wasn’t interested in doing music anymore. I didn’t have any musical equipment. At that point I’d gotten rid of whatever minimal stuff I had owned. I wanted to publish books. Around that time is when I started to work on the edition of The Antichrist. That came out at the end of 1988, about a hundred years after it was originally written, which was in 1888. I didn’t have the means to make music in terms of how I wanted to do it, and I thought books would have more impact at the time.”

from “The Storm Before The Calm: An Interview with Bood Axis”
by Wulfing One

We have been in contact with Coup De Grace since 1985, exchanging tapes and printed matter. When organising the 1986 In Vitro exhibition and concerts (see Club Moral Stocklist episode 058) we thought of

inviting them to play there as well. Since budgets were rather small for this kind of events back then, we decided to team up with some other organisations to set up a small tour and share the travel cost. It was also decided that Michael Moynihan would just come by himself, and Club Moral would play as a backing band during the European shows. In the end Cthulhu Records, V2 and Ret Marut/Jazzbunker booked this unique collaboration for 3 more shows after the In Vitro II Festival.

There was about a week of free time after the first show in Belgium and the last 3 performances occurred in a span of 2 days. If you look at the dates you will notice that the two Holland confrontations took place the same evening. This was due to the fact that after the dates had been arranged, V2 decided to change the days of their Metabletica festival. So we did the show in Rotterdam at 10:00pm, and then afterwards packed everything up and drove to V2 in ‘s Hertogenbosch, where the last performance was done (starting at about 1:30 in the morning). The components of the confrontations were as follows:AUDIO: Backing tapes, Vocals, Synthesizers & Electronics.VISUAL: Slides and Motion Pictures.Surprisingly enough after a whole day of driving (from Germany to Rotterdam, then playing the show there, then driving to V2) the last confrontation was probably the most powerful of all…
(Text from Third Annual Report 12 31 86 by Coup De Grace)

From about summer 1987 until winter 1988 Coup De Grace set up a European Office in an abandoned part of the Club Moral factory. Michael Moynihan was living there, first in companionship with Zenobia and later teaming up with Hamish Halley aka SerVex 23. Part of an attic space was rebuilt into lodgings, office and a workshop. The rent was remarkably cheap and the landlord didn’t really bother about anything going on, so any kind of activity was possible.
In October 1987 Coup De Grace was invited by AMVK to perform at an evening of Bar Europa, organised by NL-Centrum in Amsterdam.
Hamish Halley set up a leather artefact and special clothing workshop and successfully performed his Prince Albert piercing at the Club Moral Quarters using a 10ga needle and a lot of will power.

Thomas Thorn briefly stayed there and a one and only concert of Slave State was organised in a newly discovered basement underneath Club Moral.
Basically both Michael Moynihan and Hamish Halley were living in Belgium illegally, which made them decide in 1989 to return to the US and New Zealand respectively.